The World of Stamp Art

The stamp is an important object. Although very small in format, it carries a message. Stamps are a measure of the culture of a country. This tiny, rectangular piece of paper links the hearts of sender and receiver. It is a bridge between peoples and nations. The stamp knows no borders. It reaches us even in prisons, asylums, and hospitals, and wherever we may be on earth. Stamps should be ambassadors of art and life and not simply soulless proofs of postage paid. The stamp must experience its destiny. The stamp must once again fulfill its purpose, which means it must serve on letters. A true stamp must feel the tongue of the sender moistening its gum. A stamp must be stuck on a letter. A stamp must experience the dark depths of the post box. A stamp must suffer franking. A stamp must sense the hand of the postman handing the letter to the addressee. A stamp which is not mailed on a letter is no stamp. It has never lived, it is a sham. It is like a fish who has never swum, a bird who has never flown. A stamp must have lived as a stamp. The stamp is the only work of art that everyone can own, young and old, rich and poor, healthy and sick, educated and ignorant, free or robbed of freedom. This precious piece of art reaches everyone as a gift from afar. A stamp should be a testimony to culture, beauty, and the creative spirit of mankind. – – – Hundertwasser, February 14, 1990

What is stamp art?

Postage stamps and envelopes are a natural place for art. Many legal postage stamps feature artwork or the image of a famous artist from their country of origin.

However, there is a whole other category of stamps created by artists for their own use. For the most part, they are not intended to trick the postal authorities. So if they are sent thru the mail, a legal postage stamp is also applied to the envelope.

Mail Art or Stamp Art are broad categories and there are many folks in the field who pursue this unique art form in different ways.

Some create a digital stamp that is then cloned using computer technology to make a whole sheet of the stamps like this USPS uncut sheet.  These folks often use the term ” Artistamps ” for their variation.

Many stamp artists extensively decorate the envelope, and many even have their own postmark. 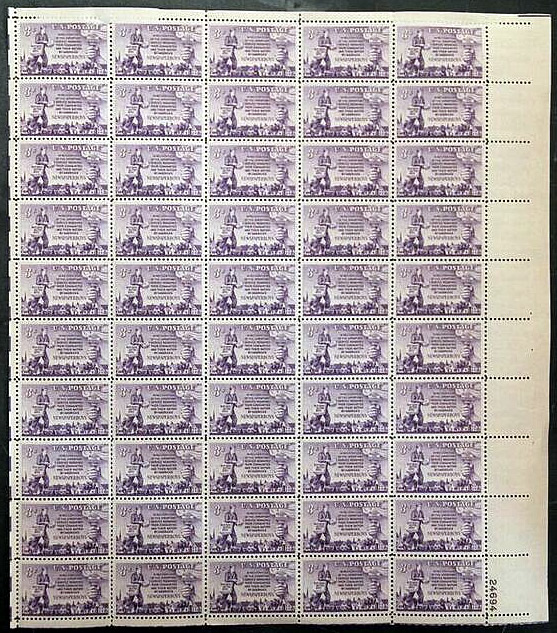 Harriet Russell is a British author who uses legal postage as part of a drawing on the envelope. 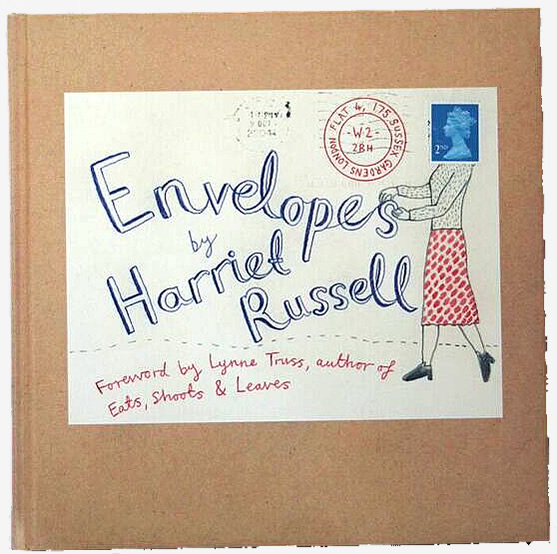 Stickers are functional and also make nice additions to an envelope composition. 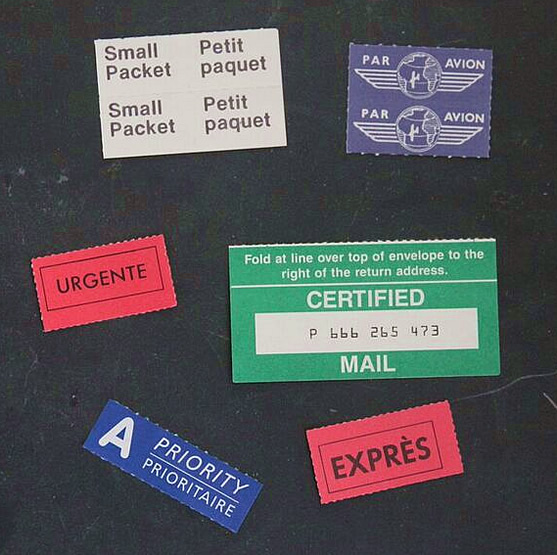 1-2018 : An artist that uses stamps as the centerpiece of her paintings I just discovered on Tumbler —Molly Rausch with a blog titled Postage Stamp Paintings. Here is a link to her wonderful portfolio:

The internet has many websites devoted to these arts which you could put under the broad category of Mail Art.

The World of Donald Evans

Donald Evans is my hero and patron saint. He invented and perfected the particular form of this art that I follow. Neither his stamps nor mine were done on a computer, nor were they photo reduced, but rather painted one at a time on fine art papers at stamp size. Once you get a look at Donald’s work you will recognize how much it is plagiarized without credit. It saddens me that he doesn’t get the notice he should.

I knew nothing of Donald until one day I was taking a study break deep in the magazine archives of the University of Washington library.  I looked next to me for a diversion, and happened to pull out a few issues of magazine I had never seen before called Quest.  I absent mindedly flipped thru them.  Suddenly there it was — an article on Donald. It was like a lightbulb had come on in a dark closet. Or as an American abstract artist said when he first saw works by Matisse  ” the paintings went thru me like an arrow and from that moment I knew exactly what I wanted to do ” I had been looking for the right art form for years — trying all sorts of media. Home, home at last !! So you can see what I saw that day— here is the first page from that brief article in 1977: 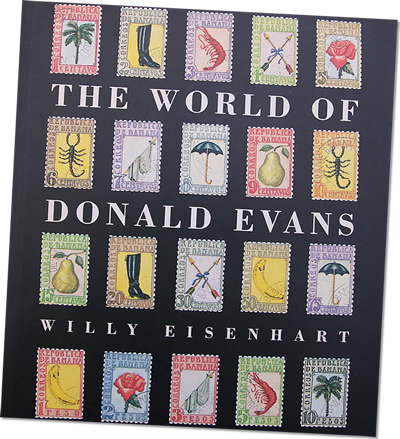 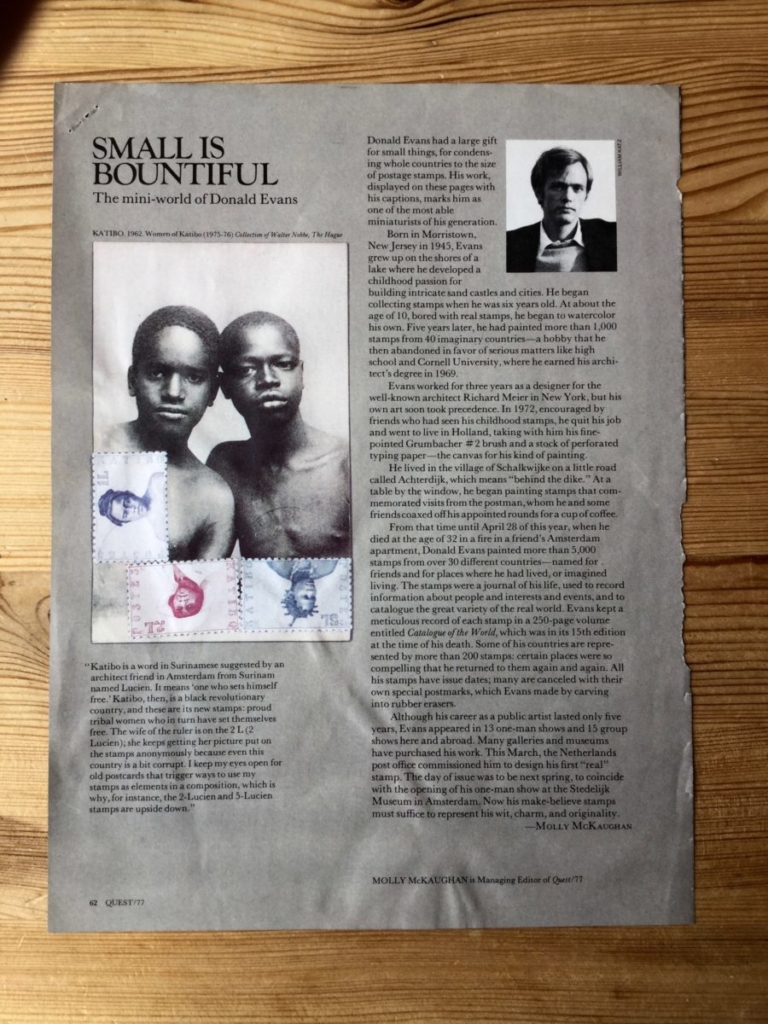 Regrettably, Donald died in a house fire in 1977. He was living in Amsterdam and only 31 years old.  There is a book, now out of print, The World of Donald Evans which illustrates his wonderful efforts. I hope he will one day grace an official U.S. commemorative stamp. If you review his stamps you will see that he was more into philately than I. He would paint multiples of the same one, paint compositions with geometric borders of countries and values — the book’s cover gives you an idea of his style.  But those were early efforts when he first moved to the Netherlands. Later on his work became much more subtle, more magical, paintings more like jewels—-as you can see in the Quest page image above  ” Women of Katibo ” — the original of which my friend in the Hague, Cecile owns and keeps on her piano.

Donald did not mail his work. I, however, have always mailed mine because I feel by risking them to the mail they have “flown” and traveled as they were meant to do—– taken far away, set loose, and worked their way home. It gives them a life, a history, and an adventure of their own. They are birthed. In 2008 I discovered a book about an artist named Hundertwasser while waiting in an Edmonton, Alberta ( Canada ) library.  The quote of his at the top of this page echoes my own feelings about the need to actually mail my paintings.  Incidentally, Hundertwasser turns out to be a pretty interesting guy.  He has a very characteristic busy sort of geometric style.  I would have enjoyed knowing him too though he lived in New Zealand apparently and died in 2000.  You might enjoy checking seeing a few of his paintings at —

In March of 2017 I was able to fulfill at long held dream and buy an original stamp that Donald Evans had done—- from a gallery in New York City. I wrote this note to the galleries director — Salvatore Schiciano:

Life can be disheartening, difficult, chaotic and busy……….but always it seems…..one can notice a pretty girls smile, or pink in the sky or taste some chocolate or meet a friend or hear a familiar song.

Donald invented an art form, a difficult variation of the larger Stamp Art, that fell into my lap after trying many different ones — it fits me just right and that is why I have stuck with it for 35 years. Over and over it gave me a way of celebrating the magic in life —trying to poke up thru the daily deluge of demands. He lives on in me and you and others though it has been 40 years since he died. The outlet his example provided has been essential to me, saved me at times, gave me an esthetic dimension that gave voice to my gratitude.

More than most, I believe you would understand for me after 35 years — the deep pleasure of holding something he also held — sharing a small piece of common joy — both of us saying life is beautiful.

thank you for that,

In May 2017 I was able to get to Amsterdam and finally cross paths with Donald. Please see my Blog tab for some pictures and look for stamps from the Country of Evans under The Paintings Tab on the masthead.

I typically create only 2-3 new stamps each year. If you will be traveling someplace very unusual or very remote and can give me plenty of advance notice, perhaps you might take one of my stamps with you and mail it back to me. Please send me an email at brucebowden1@icloud.com if this interests you.

I have always dreamed of designing a “legal” postage stamp for an existing country in the world. If you, by chance, are a government official in charge of postage for your country and would like to have me submit a design for consideration – send me an email at brucebowden1@icloud.com. Or, if you are the art director for Nike, Starbucks, or Patagonia, and would be interested in using one of my stamps or have a custom design created–please send me an email at brucebowden1@icloud.com. Thank you.