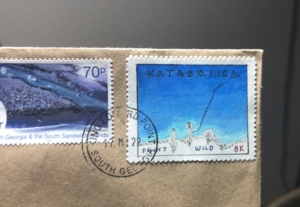 DESiGN:
This painting commemorates the place that men were left when Shackleton and a few of his crew made an open boat voyage of 800 miles to South Georgia Island to get a rescue party.  The men on Elephant Island were left in the command of Frank Wild — thus the spot was named Point Wild.  Many years later he was buried to the right of Shackleton at the cemetery in Gryviken, South Georgia Island.

Mailed:
by me to Gryviken and returned to me by the Postmaster there….. : )