My technique is to use an acid-free paper ( generally Strathmore 500 Series Drawing with a Plate Surface ) and watercolor or acrylic paints. My early stamps were all watercolor which is also what Donald Evans used. However, watercolors can be risky because one stray raindrop could destroy the entire painting. The delicate washes made possible with watercolor, however, are so resonant and so beautiful that I still often use them as I just can’t help myself.

The inspiration for a given one comes to me from many sources – my travel, my friend’s stories & pictures, magazine articles, and Google images. I let them slosh around in my mind until they settle and then paint them out. With a busy life, I sometimes miss opportunities but a deadline of someone leaving will get me working especially if going somewhere remote that I am not likely to ever see.

A stamp that has been mailed will usually have a cancellation – a mark across the stamp so that it cannot be used again. When my pigeons were mailed, my stamp was sometimes cancelled, but sometimes only the legal stamp was cancelled. It is ok either way with me although my favorite is when my stamp is cancelled and the cancellation only catches the edge of the stamp so as not to obliterate my painting. Occasionally the cancellation will add to the composition of my painting – now that’s super cool!

Donald Evans, who as mentioned, did not mail his stamps, did cancel some of them by carving an eraser in the shape of a cancellation –inking the carved side and then applying over his stamp. Many stamp artists create their own cancellation stamps for their countries. I have not generally done that except for a few like Pau, Too Steep Peak in Cascadia (which I envisioned as a backcountry post office complete with helicopter service ), and Bebe.

A great challenge for me was how to accomplish the perforations. Donald Evans apparently used the “period” on a typewriter to simulate them. I tried this but could never get it to work. So after a couple of years, I hit upon using a pounce wheel, a small rotating disc on a handle that my wife used in her dressmaking. It worked after a fashion but not well as it simply punched a hole in the paper but left a bit of a “hinge” and so if you laid the painting flat, the holes would fill up again as the partial circular paper hole hinged back up into the defect.

After about 10 years of this frustration, I was describing the problem to a machinist friend, Denis Foster, who drilled out a steel plate for me and I used a wire mounted in a pin vise to actually punch holes. My first try was in my cold garage one night in the winter and when I saw the little pieces of circular chaff on the floor, tears came to my eyes at the sight of finally – success. 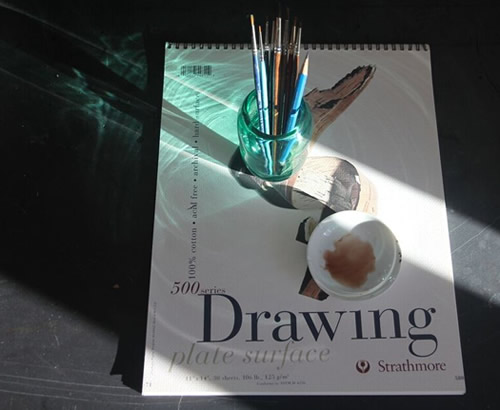 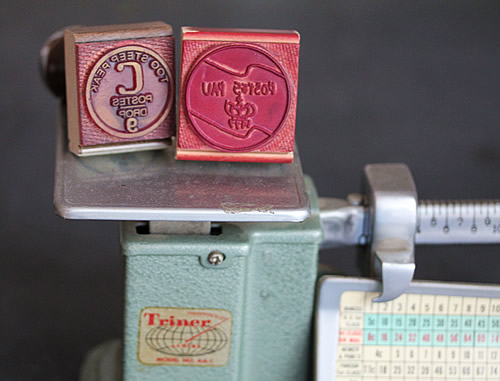 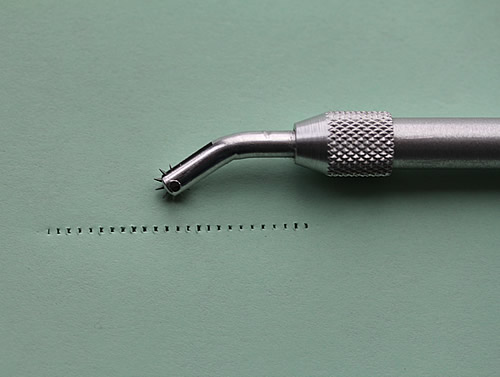 Several years later, I read of a Seattle photographer who found an old perforating machine and used it to create stamps of his photographs to market them. I also discovered Jas Felter’s website on artistamps and had the good fortune to visit him in Vancouver BC, not far from Bellingham, WA where I live. 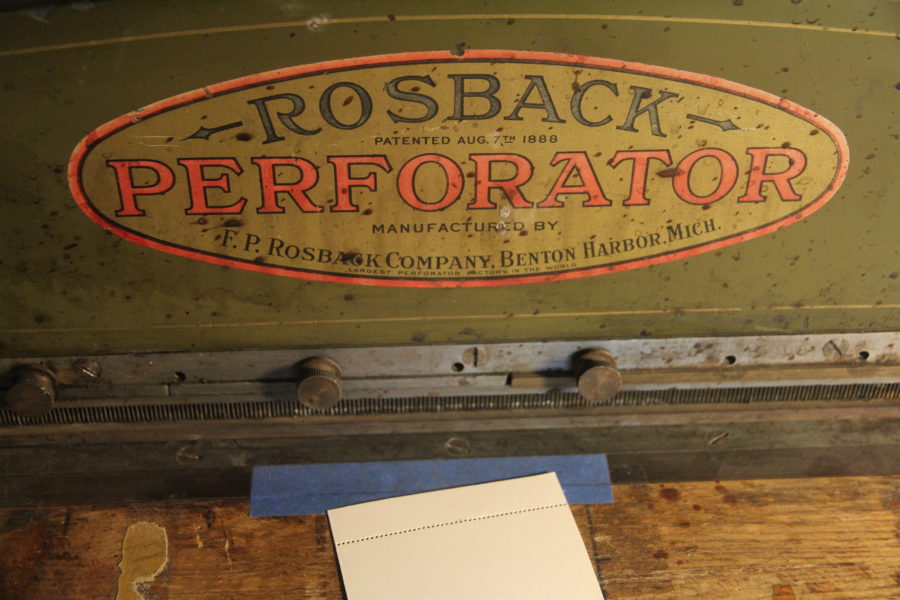 Felter had in his studio a perforating machine made by Rosback (above). He had somehow located one in a barn in Montana if I recall right. They are “old school mechanical” and use a foot pedal to actuate the pin punches. No motors or electricity. He perforated some blank paper for me to use until I could get my own machine.

I began to haunt Ebay, astounded at the variety of odd things that people were selling. What a resource : ) After a few months, one came up for sale in Oklahoma. I bid on it and thought I had it – only to get outbid in the last minute. A common occurrence on Ebay I subsequently discovered.

Heartbroken, I waited another 4 months and voila – another appeared, this time in Southern Oregon. I was determined not to lose it and so I followed it up to the last second — with the winning bid. Soon after I drove the 600+ miles to pick it up. I was SO happy to finally have a way of easily creating a row of perforations. It has worked very well for me. And I smile at my good fortune when I see it waiting in a corner of my garage to work some more……….. Yahoo ! 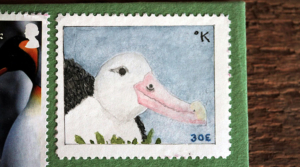